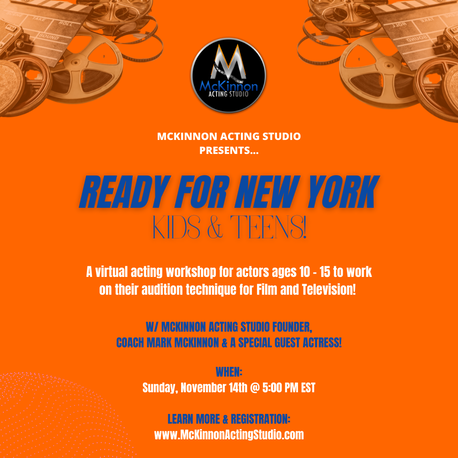 Get Coaching and Feedback from McKinnon Acting Studio Founder Mark McKinnon and Special Guest Actress Milan Ray!!
WHEN:
Sunday, November 14th @ 5:00 pm Eastern Time
COST:
$77.00
Who Can Register:
This workshop is recommended for actors ages 10 - 15.
ABOUT SPECIAL GUEST ACTRESS MILAN RAY:
Milan is currently cast as a Series Regular on ABC's new rendition of The Wonder Years. Her role of Keisa Clemmons is akin to the role of Winnie Cooper in the original series which was played by Danica McKellar. Milan has consistently played roles of strong, determined young tween/teen aged girls with lots of perseverance. Her roles in several big films include the character, 'Hell-No' in Amazon's Troop Zero and 'Shay' in HBO's Charm City Kings. Her recent TV guest star role as 'young Lil' on Amazon's Modern Love was her favorite to date since she not only played a strong, opinionated young teen but also enjoyed the trendy wardrobe that she got to wear in the episode as well.

ABOUT COACH MARK MCKINNON:
Perhaps best known for his leading role as Derik Dubois in BET's The Waiting Room some of his other credits include recurring roles in Blue Bloods (CBS) and FBI (CBS), as well as appearances on Gotham (FOX) and The Blacklist (NBC). Alongside various A-List names, Mark is an alumni of the 2020 ABC Diversity Showcase in New York.  HE attended Howard University in Washington, DC where he graduated with a BFA in Theatre Arts.

Mark has been coaching actors since 2012. In 2017, he opened the youth division for McKinnon Acting Studio to coach actors who were under the age of 18. Several members of the studio's youth division has booked projects on major network and cable series, as well as commercials and print jobs!
WORKSHOP TOPICS:
-Master your audition technique and scene breakdown.
- Mindset to Have going into a Network and/or cable series audition.
- Self Tape and Live Zoom Audition Tips
​
HOW TO PREPARE:
Each registrant will receive an email with a list of Network/Cable TV Scenes to choose from within 48 hours of registering.