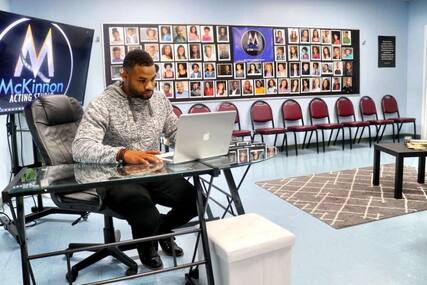 ​Coach Mark McKinnon is a Television, Film, and Commercial Actor, originally from Waldorf, Maryland. So far in his career,
he has earned over 20 acting credits, including 11 Primetime Network episodes (2 recurring roles), and 5 Leading Man
roles in feature films (1 Lead in a network film). In July 2020, the ABC Primetime New York Casting Office and ABC Studio
LA Executives, selected Mark as one of the top 16 actors in New York (out of 15,000), for the ABC Discovers Showcase.
Coach Mark has coached and consulted hundreds of actors, and have helped them get in the best possible position to gain representation,
get called in for auditions and book work in major markets such as New York, LA, and Atlanta. His clients have booked Series Regular,
Guest Star, and Co-Star roles on some of the top network, cable and streaming shows. To learn more about Coach Mark, CLICK HERE.
​

NOTES:​
Career Consultation
In the career consultation, Coach Mark McKinnon will go through a series of questions to see where you are on your journey as an actor. Based on what he learns about you, a detailed strategy and plan will be developed to get your career in the right direction. The session includes reviewing your headshots (and/or advice on getting new ones), Resume, Reel, and your online casting profiles. You will also learn about finding auditions and tips on getting representation. Coach Mark will also go over key business terms and information that you should know as a working actor. Non-Union Actors will learn details about SAG-AFTRA.

Step 1:
Select a day and time slot that you would like to book, and secure it with a payment.  Any date and/or time that is not listed, is either already booked or Coach Mark is not available.

​IMPORTANT UPDATE:
Monday, August 24th - Sunday, August 30th, Coach Mark McKinnon will not be available for any private coaching sessions or career consultations.
Step 2:
If you have not made a payment yet in Step 1, please complete that step before starting on Step 2. Only if it's your first time taking a private coaching session with us do you need to complete step 2. All other times, only step 1 is needed.