or SAVE MONEY when you purchase both workshops upfront at
​
$150.00 for Both (Blaine and Erica Workshop)
Who Can Register:
This workshop is recommended for Experienced actors ages 16 and older.
ABOUT THE SPECIAL GUESTS: 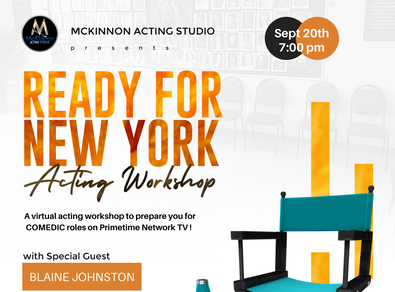 Monday, September 20th  - Blaine Johnston
Blaine's (he/him) background is in behind the camera & theater casting and he continues to work in various casting offices in New York City, including a Major Network Casting Office. His main focus is Series Regular and major Recurring roles for television. His independent tv/film credits include YOUNGER on TVLand and a short film Mariachi Madness.

Monday, September 27th - Erica A. Hart
ERICA A. HART, CSA (Casting Professional / Producer) graduated from NYU's Tisch School of the Arts, where she studied film and television. She has been casting for over 10 years on many high profile projects. She started off in network and studio casting moving her way up to Casting Coordinator in the New York Office of ABC Primetime Casting. In 2014, Erica appeared in The Hollywood Reporter as a featured rising artist. She has cast projects that have screened at the Tribeca Film Festival, SXSW, Outfest, Cinequest, and the Cannes Film Festival and are streaming on Netflix and Amazon. THE SURROGATE (a film she cast as well as associate produced) was in INDIEWIRE's Best Movies Eligible for a 2021 Oscar and was a VARIETY CRITICS PICK. She has cast commercials for high-end brands such as Maybelline, Gillette, Hasbro, and Delta, to name a few. She has also collaborated with The National Black Theatre and has cast a handful of their productions. Currently, Erica is the Casting Associate for “Ray Donovan” (Showtime), “The Bold Type” (Freeform), “Defending Jacob” (Apple), and “Godfather of Harlem” (Epix). Outside of casting, she has received grants and awards from the Puffin Foundation, New York Television Festival and The Digital Bolex, in addition to developing new serieses for BET and WeTV.

WORKSHOP TOPICS:
- Master your audition technique for Episodic Season.
- What Casting Directors are looking for when they are auditioning actors.
- Mindset to Have going into a Network and/or cable series audition.
- Q & A on the business of acting
​
HOW TO PREPARE:
Each registrant will receive an email with a list of Network/Cable TV Scenes to choose from.

​NOTE:
The presence of a casting director or talent representative does not guarantee representation or employment opportunities. This Master Class is for educational purposes only! It is your responsibility to prepare your materials well in advance of the class. We highly recommend you have your scene off book to get the most out of the feedback and coaching from our industry guest.
​
REFUND POLICY:
You will receive a full refund if you cancel your enrollment prior to 4 days of the start of the workshop you are enrolled in. If you cancel in 48-72 hours of your scheduled workshop, you will receive a 50% refund. Any cancellations in less than 48 hours of the session you are enrolled in will result in no refund​.
REGISTRATION CLOSED - COMEDY w/ Blaine Johnston - Mon, Sept 20th
SOLD OUT - DRAMA w/ Erica A. Hart - Mon, Sept 27th
Register for this Workshop
For any questions or concerns, you may email Coach Mark at actingcoach@mckinnonactingstudio.com.