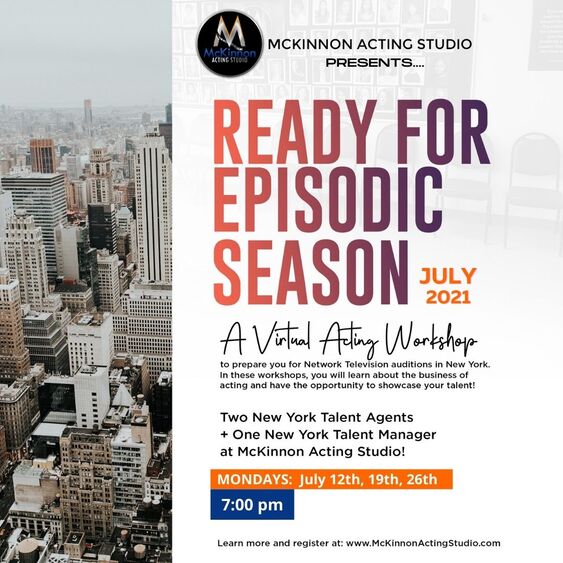 COST:
$87.00 / Workshop
Who Can Register:
This workshop is recommended for Experienced actors ages 16 and older.
ABOUT THE SPECIAL GUESTS:

Monday, July 12th  - Christopher D. Silveri - SOLD OUT
Christopher is the President and CEO of Center Stage Management, LLC, a talent management company with headquarters in New York City. Chris has been a guest at several MAS acting workshops and has called in and signed actors he met at our past workshops. He has clients who are recurring on TNT's The Sinner, CBS' Bull, Blue Bloods, ABC's Quantico, FOX's Gotham, NBC's The Blacklist, Law & Order: SVU, Netflix's Orange is the New Black, Unbreakable Kimmy Schmidt, HBO's The Deuce, The Night Of, Starz's Power, TV Land's Younger, VH1's The Breaks, AMC's Turn. Those are just the recurrings! He has had Guest Stars on nearly all television shows shooting here in NY.

Monday, July 19th - Matt Redmond
Matt Redmond has been with DGRW since 2017, rising from Assistant to Owner in just 3 years. He has been a guest at several MAS acting workshops and has called in and signed actors he met at our past workshops. Before DGRW, Matt spent time at Manhattan Theatre Club, The MUNY, and Feinstein’s/54 Below working in Directing and Producing. With a BFA in Acting/Minor in directing from Oklahoma City University, Matt views his experiences from every ‘side of the table’ as only a strength in leading DGRW.

Monday, July 26th - Nicole Wichinsky
​Nicole Wichinsky is a Senior Theatrical Agent for Stewart Talent in New York City, where she represents clients for Theatre, Television, and Film.  She has been a guest at several MAS acting workshops and has called in actors she met at our past workshops. Nicole has a Bachelor's degree in Film, and a Master's Degree in Educational Theatre. In addition to her over 16 years career as an agent, Nicole can be found teaching classes in business for actors, actor packaging, improvisation, acting, and audition technique, as well as working with university conservatory students across the country.
WORKSHOP TOPICS:
- Master your audition technique for Episodic Season.
- What Talent Reps Are Looking for when adding a client to roster.
- Mindset to Have going into a Network and/or cable series audition.
- Q & A on the business of acting
​
HOW TO PREPARE:
Each registrant will receive an email with a list of Network/Cable TV Scenes to choose from.