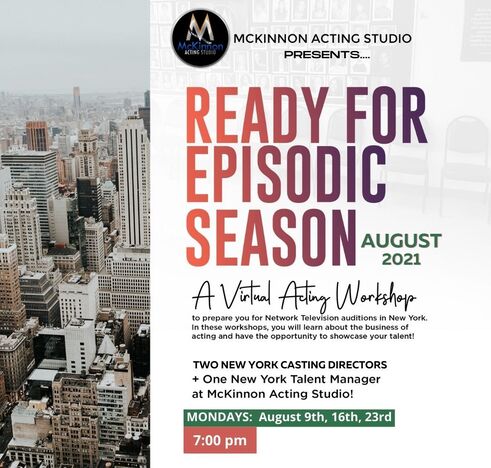 Who Can Register:
This workshop is recommended for Experienced actors ages 16 and older.
ABOUT THE SPECIAL GUESTS:
Monday, August 9th - YOLANDA HUNT (Casting Director)
Yolanda Hunt began her career in casting with the "Late Great" Director/Producer John Singleton.  Her mentor is casting guru Robi Reed. Yolanda landed the title of Casting Assistant on the movie Poetic Justice that starred Tupac Shakur and Janet Jackson.

Yolanda has been called In to cast several projects for directors such as Regina King, Kim Hardin, Leah Daniels Butler, Malcolm Lee, Hughes Brothers, Stan Lathan, and so many others. Her most recent projects were "One Night in Miami" directed by Regina King and "Safe Space" directed by Boris Kodjoe. Her casting credits include Sister to Sister, Moesha, The PJ's, The Best Man, Crookly, Kingdom Come, and many more.
Monday, August 16th - JENEVIEVE BREWER (Talent Manager) - Brewer Entertainment Mgmt
Jenevieve Brewer has been in the business 20 years. In March 2015 Jenevieve opened her own management company Jenevieve Brewer Talent Management. She works with a select pool of children and adult clients. Currently she manages Leo Sheng who is a series regular on The L-Word on Showtime.  Her clients have booked guest star roles for numerous episodics such as For Life, Blue Bloods, Billions, Chicago P.D. and FBI Most Wanted.  She has clients recurring in Station 19, Grey's Anatomy, FBI, Pose, Wu Tang, High Fidelity, Orange is The New Black, Power, The Deuce and Future Man.  Her clients have booked supporting and lead roles in the feature films such as Uncut Gems, The Irishhmen and Late Night. Clients have appeared on Broadway in The Rose Tattoo, Fish In The Dark and Big Fish.  Her clients currently appear or have appeared in national and regional on camera and voiceover spots for Mcddonalds, Jiffy Lube, Estee Lauder, Verizon, Coke, Swiffer and Nike.
Monday, August 23rd - LAIN KUNIN (Casting Director) - Julie Schubert Casting
Lain Kunin has worked on several  projects including NBC’s Manifest, ABC's For Life, Marvel's Luke Cage, Iron Fist, The Defenders, The Punisher, Daredevil, Jessica Jones and more. Prior to that, she was at Mackey/Sandrich Casting where she worked on Season 1 of NBC's Shades of Blue and at the Roundabout Theatre Company/Jim Carnahan Casting where she worked on a variety of Broadway, film, and television projects including the Oscar nominated film, Brooklyn and television series, Glee. Currently, Lain is currently working on three television series-- one network, one cable, and one streaming.
WORKSHOP TOPICS:
- Master your audition technique for Episodic Season.
- What Talent Reps Are Looking for when adding a client to roster.
- Mindset to Have going into a Network and/or cable series audition.
- Q & A on the business of acting
​
HOW TO PREPARE:
Each registrant will receive an email with a list of Network/Cable TV Scenes to choose from.