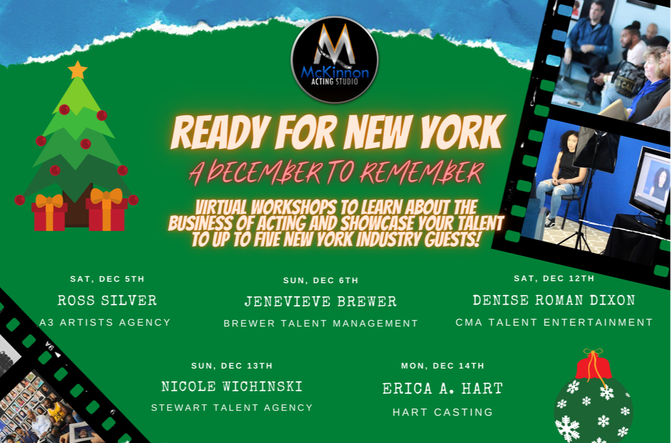 THIS WORKSHOP IS NOW SOLD OUT! REGISTRATION IS CLOSED!
Email us at actingcoach@mckinnonactingstudio.com to be added to the waitlist!
COST:

Purchase FIVE Sessions upfront and save $115!
Note: Black Friday Sale Pricing Ends Sunday, November 29th! Black Friday Discount already included in price! You do not need to enter any coupon code!
Who Can Register:
Experienced actors ages 16+
Sat, Dec 5th @ 2:00 pm
ROSS SILVER - Talent Agent - A3 Artists Agency
Ross Silver has been a guest at one of our past workshops at McKinnon Acting Studio and we are honored to have him return! He is an agent in the Talent Division at A3 Artists Agency, formerly Abrams Artists Agency, working on television, theatre, and film. A3 is one of the top talent agencies in the industry and represents actors seen in major feature films, television shows, Broadway productions, and more.


Sun, Dec 6th @ 2:00 pm
JENEVIEVE BREWER - Talent Manager - Brewer Talent Manager
Jenevieve Brewer has been a guest at several of our past workshops and we are honored to have her return! She has called in several actors for representation, after meeting them at our workshops. Jenevieve has been in the business 20 years. In March 2015 Jenevieve opened her own management company Jenevieve Brewer Talent Management. She works with a select pool of children and adult clients. Currently she manages Leo Sheng who is a series regular on The L-Word on Showtime.  Her clients have booked guest star roles for numerous episodics such as For Life, Blue Bloods, Billions, Chicago P.D. and FBI Most Wanted.  She has clients recurring in Station 19, Grey's Anatomy, FBI, Pose, Wu Tang, High Fidelity, Orange is The New Black, Power, The Deuce and Future Man.  Her clients have booked supporting and lead roles in the feature films such as Uncut Gems, The Irishhmen and Late Night. Clients have appeared on Broadway in The Rose Tattoo, Fish In The Dark and Big Fish.  Her clients currently appear or have appeared in national and regional on camera and voiceover spots for Mcddonalds, Jiffy Lube, Estee Lauder, Verizon, Coke, Swiffer and Nike.


Sat, Dec 12th @ 2:00 pm
Denise Roman Dixon - Talent Manager - CMA Entertainment Management
Denise has been a guest at several of our past workshops and we are honored to have her return! She has called in several actors for representation, after meeting them at our workshops. Cheryl Martin Allen Entertainment (CMA), owned by Cheryl Martin and Troy Allen, and the New York office run by DENISE ROMAN DIXON is a highly respected team in talent management and production with over 20 years experience in the entertainment industry. With our principal offices in the Los Angeles area and New York, we represent clients in most sectors of the entertainment industry including motion picture, television, voice-over, theatre and music. CMA works closely with their clients in every facet of their career and acts in conjunction with their clients' agents, publicists, business managers, attorneys and all others. She has 10 years experience in the film industry. On Camera, Production, Locations, and Management. Denise has experience working in film, and film production in Vancouver Canada, and New York. Their clients have been cast in several Network, Cable, Streaming, and Film projects.


Sun, Dec 13th @ 2:00 pm
Nicole Wichinsky - Talent Agent - Stewart Talent Agency
Nicole Wichinsky has been a guest at several of our past workshops and we are honored to have her return! She is a Senior Theatrical Agent for Stewart Talent in New York City, where she represents clients for Theatre, Television, and Film.  Nicole has a Bachelor's degree in Film, and a Master's Degree in Educational Theatre. In addition to her over 16 years career as an agent, Nicole can be found teaching classes in business for actors, actor packaging, improvisation, acting, and audition technique, as well as working with university conservatory students across the country.


Mon, Dec 14th @ 7:00 pm
Erica A. Hart - Casting Director - Hart Casting
ERICA A. HART, CSA (Casting Professional / Producer)  has been a guest at several of our past workshops and we are honored to have her return! She has called in several MAS actors for auditions, after meeting them at our past workshops. She graduated from NYU's Tisch School of the Arts, where she studied film and television. She has been casting for over 10 years on many high profile projects. She started off in network and studio casting moving her way up to Casting Coordinator in the New York Office of ABC Primetime Casting. In 2014, Erica appeared in The Hollywood Reporter as a featured rising artist. She has cast projects that have screened at the Tribeca Film Festival, SXSW, Outfest, Cinequest, and the Cannes Film Festival and are streaming on Netflix and Amazon. THE SURROGATE (a film she cast as well as associate produced) was in INDIEWIRE's Best Movies Eligible for a 2021 Oscar and was a VARIETY CRITICS PICK. She has cast commercials for high-end brands such as Maybelline, Gillette, Hasbro, and Delta, to name a few. She has also collaborated with The National Black Theatre and has cast a handful of their productions. Currently, Erica is the Casting Associate for “Ray Donovan” (Showtime), “The Bold Type” (Freeform), “Defending Jacob” (Apple), and “Godfather of Harlem” (Epix). Outside of casting, she has received grants and awards from the Puffin Foundation, New York Television Festival and The Digital Bolex, in addition to developing new series for BET and WeTV.
MASTER CLASS TOPICS:
- Master your On-Camera / Zoom audition technique
- What Casting Directors Are Looking for In Your Audition
- Mindset to Have going into a Network and/or cable series audition.
- Q & A on the business of acting

HOW TO PREPARE:
Each registrant will receive an email with a list of Network/Cable TV Scenes to choose from.

FORMAT:
During the workshop, Actors will be paired up with a reader to perform their scene and receive coaching and feedback. Actors will get to rehearse with their reader in a breakout room prior to their turn, to get comfortable with each other. The intensive will start with a Q&A on the business of acting and then we will see the actors perform their mock-audition.

​NOTE:
The presence of a casting director or talent representative does not guarantee representation or employment opportunities. This Master Class is for educational purposes only!
It is your responsibility to prepare your materials well in advance of the class. We highly recommend you have your scene off book to get the most out of the feedback and coaching from our industry guest.
​
REFUND POLICY:
You will received a full refund if you cancel your enrollment within 48 hours of your purchase.  If you cancel your enrollment prior to 4 days of the start of the class you are enrolled, you will receive a 50% refund. Any cancellations in less than 3 days of the session you are enrolled in will result in no refund.
THIS WORKSHOP IS NOW SOLD OUT! REGISTRATION IS CLOSED!
Email us at actingcoach@mckinnonactingstudio.com to be added to the waitlist!
Register for this Workshop
For any questions or concerns, you may email Coach Mark at actingcoach@mckinnonactingstudio.com.