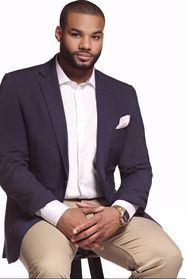 Mark McKinnon's personal philosophy of humility, hard work, and patience coupled with the discipline, determination, and drive learned through his sports background, have equipped him with the tools to be successful in the entertainment business. He has booked roles on "The Blacklist" (NBC), "Gotham" (FOX),  and "Blue Bloods" (CBS).  Mark has also been on the popular Soap Opera, "One Life to Live", playing the assistant to Hip Hop legend, Snoop Lion. He has been featured in national campaigns for Degree Deodorant and the Military, plus several global print campaigns.

Growing up in Waldorf, Maryland sports were McKinnon's world, but he always knew he was destined to be in the performing arts. In high school, he won team MVP for the varsity football team by leading his team in receptions and interceptions. He also was a team captain for two years on the varsity basketball team. Despite being a talented, multi-sport athlete and busy high school student, McKinnon still found time to pursue the arts. While McKinnon originally dreamed of becoming a professional football player, after landing the leading role in his high school play he was inspired to become a professional actor. In fact, to pursue this dream he turned down several football scholarships and attended the prestigious Howard University to study acting. After graduation, McKinnon frequently traveled between Washington, DC and New York City to establish his professional acting career.

In 2012, Mark opened his Private Coaching and Consultation business for actors, where he specialized in helping beginners start a professional career and taught actors, heavily trained in theatre, on how to transition into Film / TV. As of today, Mark has mentored and coached hundreds of actors. Through Mark's coaching and philosophy, several actors have booked paid acting jobs and have begun successful acting careers.