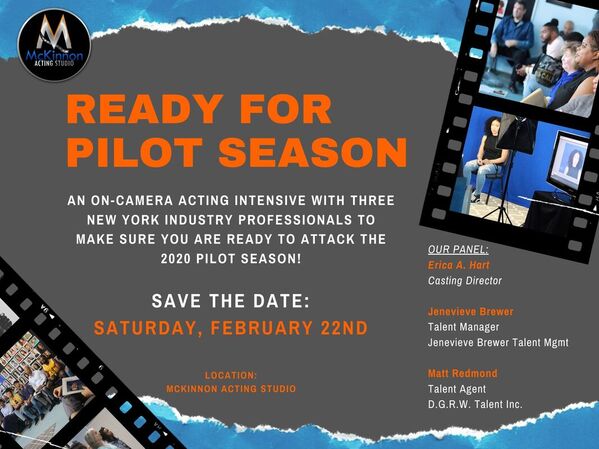 Pilot Season is here! Learn about the Business of Acting and Showcase
Your Talent to Three New York Industry Professionals at McKinnon Acting Studio in Maryland!
February 22nd
1:00 pm or 4:30 pm
(Must be at least 18 years old to attend)
IMPORTANT NOTE:
1:00 pm Session - SOLD OUT!
4:30 pm Session - SOLD OUT!
*You may email us at actingcoach@mckinnonactingstudio.com to be added to waitlist.
February 22nd Industry Panel:
ERICA A. HART
Casting Director
Erica has called in several actors from our past workshops to audition for projects, after meeting them at one of our events. She has been casting for over 10 years on many high profile projects. She has cast projects that have screened at SXSW as well as Cannes. Some projects are streaming Netflix and Amazon. She has cast commercials for high end brands such as Maybelline, Gillette, and Crunch to name a few. She has also cast projects for The National Black Theatre, The Apollo and The Drama League. Currently, Erica is the Casting Associate for a handful of cable shows as well as a show that will be streaming later this year.
Erica Hart graduated from NYU's Tisch School of the Arts, where she studied film and television and was previously the Casting Coordinator of Casting for a Primetime Network in NY casting series regulars for numerous pilots and currently running series.

MATT REDMOND
​TALENT AGENT
DGRW Talent Agency
Matt Redmond has called in two actors after meeting them at one of our previous acting workshops. They are both now signed to DGRW  and our auditioning a lot in New York. Matt graduated from Oklahoma City University with a BFA in Acting and Minor in Directing. He has worked professionally in St. Louis and New York directing and producing with places including The MUNY, Feinstein's/54 Below, Manhattan Theatre Club, the Green Room 42, and more. Matt started working full time for DGRW Talent as an Assistant in 2017 and is now a Legit Agent.


JENEVIEVE BREWER
TALENT MANAGER
Jenevieve Brewer Talent Mgmt
Jenevieve Brewer has called in three actors after meeting them at one of our previous acting workshops. They are both now signed and have been auditioning a lot in New York. Jenevieve has transitioned from launching and running the Aboutface division at Carson/Kolker for 10 years into management. In March 2015 Jenevieve opened her own management company Jenevieve Brewer Talent Management. She works with a select pool of children and adult clients. Her clients have booked guest star roles for numerous episodics such as FBI, Tales, Bull, Chicago PD, Law and Order SVU, Billions, Nightcap, Gotham and Blue Bloods. She has clients recurring in  $1, Orange is The New Black, Power, The Deuce, Good Girls and Dietland.  Her clients have booked supporting and lead roles in the feature films coming out such as Hide and Seek, Adam and The Last Thing He Wanted. Her clients currently appear in national and regional on camera and voiceover spots for  Mastercard, Verizon, Coke, Swiffer, PNC Bank, Merryl Lynch, Nike and Golden Corral.
PRICE:
$197.00  (Early Bird Price $177.00)
Learn from and Showcase Your Work to three New York Industry Professionals.
Early Bird Sale ends Sun, Feb 2nd at 11:59 pm.

*Sales Tax will be added to all options.
**Payment must be made to reserve / secure your seat.
PAYMENT OPTIONS:
Not able to pay the full amount now? No worries! Reserve your seat with a non-refundable Deposit of $87.00   The remaining balance is due seven days prior to the workshop. Deposits are not eligible for the Early Bird Special price. Early Bird Specials must be paid in full up front.  If you reserve your seat with a deposit, An invoice with your remaining balance will be emailed to you within 48  hours after your desposit has been received.
INTENSIVE INCLUDES:
FORMAT:
Each intensive will start with a brief Q&A with the industry guests. Next, each actor, one by one, will go in front of the panel and a reader to perform their scene on camera. After receiving coaching and feedback, the actor may possibly get the chance to do the scene a second time. All other actors in attendance will be able to watch your performance live on a screen while you're auditioning.
SCENE SELECTION:
Once you complete registration and make a payment, an email with a link to dozens of  Film & TV scenes will be provided. You also have the option to bring in and use your own scene instead of using one from our link. The scene must be 2.5 mins long or less and be from a TV show or Film. No scenes from plays / theatre shows. No monologues.

​PLEASE NOTE:
The presence of a casting director or talent representative does not guarantee representation or employment opportunities.
It is your responsibility to prepare your materials well in advance of the intensive. We highly recommend you have your scene off book to get the most out of the feedback and coaching from our industry guests.
This intensive is for  actors ages 18 and older.
This is not a "Pay to Play" event. That type of event is when a casting director or director charges actors to audition for a specific project or role. Our studio produces events for LEARNING & EDUCATIONAL purposes. The industry guests that we have come to our studio, are there to teach actors about the industry and understanding the business side of it. They also give feedback on your work to help you improv your audition technique. Paying for legitimate and useful advice from an expert in his or her field is fine and legal. But “pay-to-play” (paying to interview or audition) is illegal.
WHERE:
McKinnon Acting Studio
​8500 Jericho City Drive
Hyattsville, MD 20785
IMPORTANT NOTE:
1:00 pm Session - SOLD OUT!
4:30 pm Session - SOLD OUT!
*You may email us at actingcoach@mckinnonactingstudio.com to be added to waitlist.
Register for this Workshop
For any questions or concerns, you may email Coach Mark at actingcoach@mckinnonactingstudio.com.