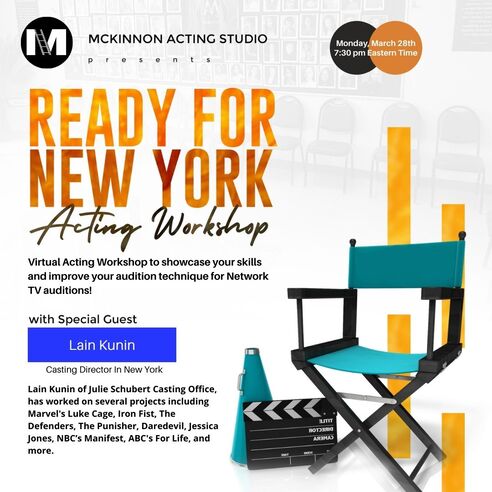 Learn about the business of acting and showcase your talent to a New York Casting Director!

WHEN:
Monday, March 28th @ 7:30 pm Eastern Time
COST:
$87.00
Who Can Register:
This workshop is recommended for Experienced and beginner level actors ages 16 and older.
ABOUT THE SPECIAL GUEST:
​Lain Kunin has worked on several  projects including NBC’s Manifest, ABC's For Life, Marvel's Luke Cage, Iron Fist, The Defenders, The Punisher, Daredevil, Jessica Jones and more. Prior to that, she was at Mackey/Sandrich Casting where she worked on Season 1 of NBC's Shades of Blue and at the Roundabout Theatre Company/Jim Carnahan Casting where she worked on a variety of Broadway, film, and television projects including the Oscar nominated film, Brooklyn and television series, Glee. Currently, Lain is currently working on three television series-- one network, one cable, and one streaming. She has called in several MAS actors into her office to audition for her shows she is casting.
WORKSHOP TOPICS:

- Master your audition technique and scene breakdown.
- What Casting Directors Are Looking for In Your Audition
- Mindset to Have going into a Network and/or cable series audition.
- Q & A on the business of acting
​
HOW TO PREPARE:
Each registrant will receive an email with a list of Network TV Scripts to choose from and record a self tape of that scene.

FORMAT:
The workshop will start with a Q&A on the business of acting and then we will see the actors perform their mock-auditions. During the workshop, Actors will have their self tape shown to the class and get to perform their scene live after receiving feedback.

​NOTE:
The presence of a casting director or talent representative does not guarantee representation or employment opportunities.
This workshop is for educational purposes only!
It is your responsibility to prepare your materials well in advance of the class. We highly recommend you have your scene off book to get the most out of the feedback and coaching from our industry guest.
REFUND POLICY:
You will receive a full refund if you cancel your enrollment prior to 4 days of the start of the workshop you are enrolled in. If you cancel in 48-72 hours of your scheduled workshop, you will receive a 50% refund. Any cancellations in less than 48 hours of the session you are enrolled in will result in no refund​.
Register for this Workshop
For any questions or concerns, you may email Coach Mark at actingcoach@mckinnonactingstudio.com.