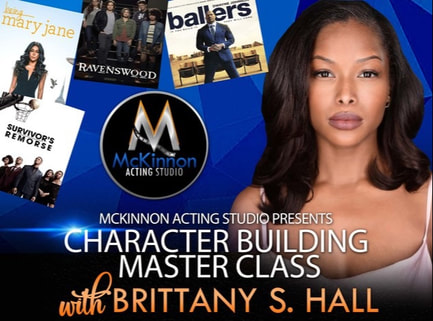 This specific page is for Members of Actors Center Only!

*This Master Class is for new and experienced actors over the age of 18. There will only be 10 spots for this class! 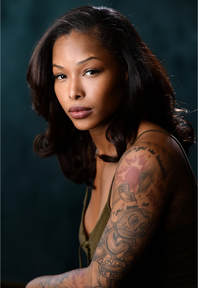 Brittany S. Hall was born  in Washington D.C. and raised in the D.C./MD area where she discovered her love for the performing arts. At an early age she began performing in school plays, community plays, and dance recitals.  Brittany continued studying theatre in college where she studied as a Theatre Major at Frostburg State University. She now resides in Los Angeles, Califorina where she continues her career in Film and Television and coaches new and experienced actors.

In 2009, Brittany was cast in VH1's hit reality Show "Real Chance of Love 2," where she was given the nickname "Hot Wings."  She instantly became a favorite of producers and viewers and went on to be one of the winners of the show. In 2011, while living in New York City, Brittany found another stage in Stand Up Comedy. She performed at one of NYC's most popluar comedy clubs Laugh Lounge. After moving to Atlanta in 2013, Brittany found herself in front of the camera yet again, working under the stage name  "Kamille Leai," she appeared as a lead in a number of music videos with artist such as Migos, Trevor Jackson, Luke James, Tank, and The Dream.
​
Brittany returned to her passion of acting in 2014 after studying at Atlanta's Premiere Actors Network. She appeared on series such as ABC's "Ravenswood", Starz' "Survivors Remorse", BET's "Being Mary Jane" and a supporting role in VH1's Drumline 2.  In 2015, she was cast for the recurring role of "Rosalie" on the USA series "Satisfaction". Her character returned for the second season as a series regular. It is also in 2015 when Brittany decided to stop working under her stage name.
​
In 2017, Brittany joined Season 3 of HBO's Ballers as Amber. She was upped to series regular for Season 4, which is now in production. Next she will also appear alongside Sanaa Lathan in Netflix's original comedy "Nappily Ever After."

She is Represented by APA, Stokes Management, and AWA.
Register for this Workshop
INTENSIVE INCLUDES:
FORMAT FOR ADULT SESSION:
The Master Class  will start with a talk about the Business side of acting and a brief Q&A with our special guest.  Each actor, one by one, will get to perform a a film/tv scene. After receiving coaching and feedback, the actor may be asked to do the scene again. All other actors in attendance will be able to watch your performance live on a screen while you're auditioning.


The Process:
Once you complete the registration form and payment, you will receive an email with tv/film script options to choose from. You will receive this email within 48 hours after we have received your payment.

​PLEASE NOTE:
*It is your responsibility to prepare your materials well in advance of the intensive. We highly recommend you have your scene off book to get the most out of the feedback and coaching from our industry guest.

PRICE:
$45.00
(Price for member of Actors Center)
*Sales Tax will be added
**Payment must be made to reserve / secure your seat.