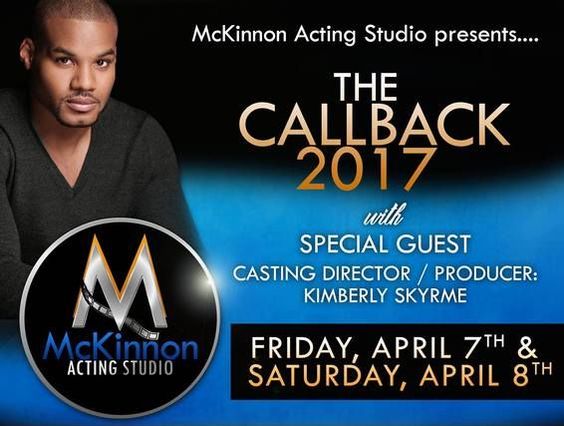 Update:
Saturday, April 8th, at 12:00 pm - SOLD OUT
Saturday, April 8th at 4:00 pm - SOLD OUT
INFO:
Friday, April 7th , Casting Director, Kimberly Skyrme,  will teach on the business of acting. She will cover topics such as Self Taping, Marketing your "Business", what it takes to get a callback, and so much more. There will also be a Q & A session with Kimberly. You can choose to only come Friday night, or select to come both days.

Saturday, April 8th, the actors will get to work on their on-camera technique with Kimberly. Actors will be given scenes to choose from once they register. Each actor, one by one, will go in front of Kimberly and a reader to perform their scene on camera. After receiving coaching and feedback, the actor will get to do the scene a second time. All other actors in attendance will be able to watch your performance live on a flat screen. For Saturday, only 15 actors will be able to register for each session.

*For actors ages 16+
INTENSIVE INCLUDES:
SCENE SELECTION:
Once you complete registration and make a payment, an email with a link to dozens of  film / TV scenes will be provided. You also have the option to bring in and use your own scene instead of using one from our link. The scene must be no more than 2-3 pages and be from a TV show or film. No scenes from plays / theatre shows.

*It is your responsibility to prepare your materials well in advance of the intensive. We highly recommend you have your scene off book to get the most out of the feedback and coaching from our industry guests.
WHERE:
McKinnon Acting Studio
​8500 Jericho City Drive
Hyattsville, MD 20785

​WHEN:
Friday, April 7th  (7:30 pm)
and
Saturday, April 8th (12 pm or 4 pm)
Note: Members of Actors Center must use the link on the Actor's Center site for special price. Students of McKinnon Acting Studio must use link in the email that was sent out for the special price.
PRICE:
GOLD PACKAGE, Group A - $175.00
​Friday, April 7th, 7:30 pm and Saturday, April 8th, 12:00 pm
With the Gold Package - Group A, you will be registered to come Friday night to learn the business
of acting and have a  Q & A with Kimberly Skryme. You will also be registered to come on
Saturday at 12:00 pm to learn On-Camera technique with Kimberly.
​

GOLD PACKAGE, Group B - $175.00
​Friday, April 7th, 7:30 pm and Saturday, April 8th, 4:00 pm
With the Gold Package - Group B, you will be able to come Friday night to learn the business
of acting and have a  Q & A with Kimberly Skryme. You will also be able to come on
Saturday at 4:00 pm to learn On-Camera technique with Kimberly.


​SILVER PACKAGE - $80.00
Business of Acting Session Only.
Friday, April 7th at 7:30 pm.
With the Bronze Package, you will be able to come on Friday night to learn the business
of acting and have a Q & A with Kimberly Skyrme. The Silver Package does not include class
​on Saturday, April 8th.


* MD Sales Tax will be added to all options.
PAYMENT OPTIONS:
Not able to pay the full amount now for the Gold Package? No worries! Reserve your seat with a non-refundable Deposit of $75.  The remaining balance is due by Friday, March 31st, 2017. An invoice with your remaining balance will be emailed to you if you paid a non-refundable deposit. Deposits are not eligible for the Early Bird Special. Early Bird Specials must be paid in full up front.
Registration is Closed - SOLD OUT

ABOUT KIMBERLY:
Kimberly Skyrme is a Casting Director and Producer who has been in the business for 27 years. She recently completed Regional Casting for the STARZ Original Series The Girlfriend Experience which will be shooting in Washington DC this May. She also Produced and Cast the comedy pilot Bennie’s starring Eight time Emmy Award winning actor Ed Asner with Joe Esteves and Tonye Patano with a Guest Appearance by Oscar Award Winning Actress Cathy Moriarty.

In addition to Producing and Casting the Feature Film, April Come She Will with the producer and director of Bennie’s, Kimberly is also producing the Musical Comedy with writer|director Peter Bogdanovich, One Lucky Moon, a screwball high jinx comedy and The Hive a Psychological Thriller with writer|director Paul Lingas. She is developing three original series and Executive Producing a Slate of Feature Films.

ABOUT MARK:
​
​Mark McKinnon has booked Co-Star roles on "The Blacklist" (NBC),  "Gotham" (FOX),  "Blue Bloods" (CBS),
​and many more.  He is a the founder of McKinnon Acting Studio. This studio was created to offer affordable acting classes, private coaching, audition tape services, and consultation for beginning and experienced actors in the Washington, DC area. Since 2012, Coach Mark has coached and consulted hundreds of actors, and have helped them get in the best possible position to get called in for auditions and book work. Throughout the year, McKinnon Acting Studio hosts Industry Workshops where the studio bring in special guest Casting Directors, Agents, and Managers from New York to teach on different topics. Our past guest included:

TO LEARN MORE ABOUT MARK & MCKINNON ACTING STUDIO, CLICK HERE.
Registration is Closed - SOLD OUT
For any questions or concerns, you may email Coach Mark at markmckinnon.nyc@gmail.com.