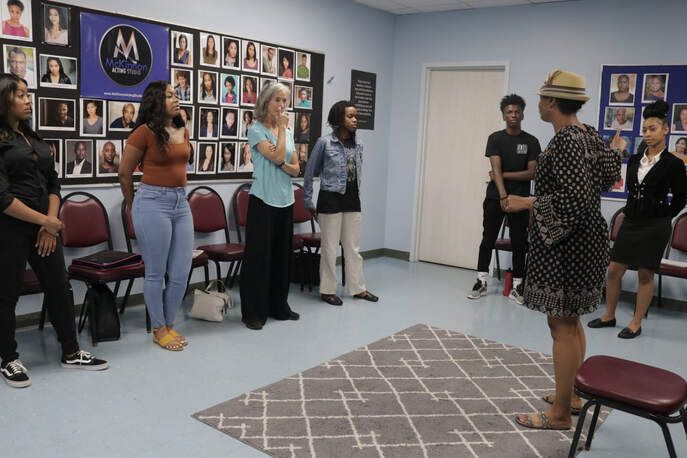 
WHO IS THIS CLASS FOR:
This class is for experienced actors. It's also for actors who have taken and successfully passed the "CHARACTER/SCENE STUDY" Course or have been accepted through a mock audition. Ages 16+

INFO:
The Advanced Film/TV Audition Prep class is an on-going class taught by MARCUS ANDERSON (Tuesdays) and SHAWN COSBY (Thursdays).  In this class, the actors will work on their on-camera audition technique to grow as an actor and feel empowered going into their next on-camera audition.  The actors in this group will focus on Guest Star and Series Regular roles for television. The actors will  also work on lead and supporting roles for films. A great thing about this class, is that sometimes special guest instructors, directors, and actors could be in attendance to teach and/or observe talent.

NOTE:
​Your first session in this class will serve as a free class audit!  You must complete a "Free Class Audit" form  at least two days prior to attending your first class. (You can select the "FREE CLASS AUDIT" button below to get started. At the end of your first class, you will get to do a mock-audition with a scene that will be provided to you within 24-48 hours after you complete the Free Class Audit Form. Based on your audition, our team will determine if you can continue to train in our FILM/TV AUDITION PREP Class or if you would be assigned to our CHARACTER/SCENE STUDY Course. If you're accepted into our Advanced Film/TV Class after your mock audition, you will receive an email from our team with instructions on how to pay for your classes.


COURSE SCHEDULE FOR "ADVANCED FILM/TV "CLASS:
In the FILM/TV AUDITION PREP Class, the actors will receive assignments/scenes to work on each class to give the actor a real audition experience with a realistic time to prepare. This means each week, our team will
have different assignments to keep you sharp as an actor.

​
PRICE FOR ADVANCED FILM/TV CLASS (After your free class audit):
$127 / 4 Sessions
*If you purchase 4 Sessions, you have a 6-week window to complete those 4 sessions from the date that you make the payment. This means that if you miss a class within that 6-week window, it won't count as a lost class. After the 6-week window, any remaining classes will be forfeited.
Important Note: THURSDAY Night Advanced Class is currently full and will not open up new spots until after Feb 13th.
​​Questions or Concerns? Email us at admin@mckinnonactingstudio.com.
“Mark has helped me determine and realize what my "brand" as an actress is, in a very successful, unique, and casting- agent- drawing way!  And perhaps most importantly helped me to see my true potential as an actress. Since studying under Mark I have booked several high paying gigs!”
-Ariel Lewis