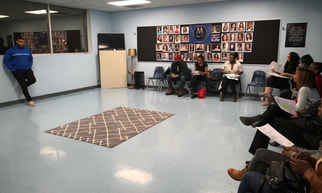 NOTE:
​Your first session in our Adult Acting Class will serve as a free class audit. You can audit a class on a Monday, Tuesday or Thursday evening. At the end of that class, you will get to audition with a scene that will be provided to you 1-2 days prior to class. Based on your audition, our team will determine if you are assigned to our "INTRO TO ACTING" Course or our "ADVANCED TV/FILM" Class. You must complete the "Free Class Audit" form to secure a spot to audit a class; Select button below.

ADVANCED FILM/TV CLASS:
The advanced film/tv class is an on-going class taught by Coach Mark McKinnon. To take this course, you must pass the "Intro to Acting" course or be accepted through an audition with our team. This class will work on Film and Television audition technique and character/scene study to grow as an actor and knock out your auditions.  The actors in this group will focus on Co-Star, Guest Star, and Series Regular roles for television. A great thing about this class, is that you get to network and learn from other working actors in the class. Special guest instructors, directors, and actors may be in attendance to teach and/or observe talent.

COURSE SCHEDULE FOR "ADVANCED FILM/TV "CLASS:
In the Advanced Film/TV Class, the actors will receive a different assignment/scene to work on each class to give the actor a real audition experience. ​

INTRO TO ACTING COURSE:
The Intro to Acting course is a 4-week class taught by Coach Cori Dioquino and/or Coach Princess Ezeofor each month. In this class you will learn McKinnon Acting Studio's 9-step character/scene study technique and basic on-camera audition technique to help you get started as an actor. The 4-week rotation starts at the top of each month. The actors in this class must pass this course to be eligible to take the Advanced Film/TV Class or the Power 6 Classes taught by  Coach Mark McKinnon.

WHEN:
MONDAYS, TUESDAYS, OR THURSDAYS

NOTE:
Actors must complete and pass the "Intro to Acting" 4-week Course or become eligible through an audition to take the Power 6 Class.

POWER 6 CLASS:
In our Power 6 Acting Class, there will be six or less actors in each session. This means more work time for you in each session! Similar to the Group Acting Class, you will work on Film / TV audition technique and learn branding and marketing tools to grow as an actor. Some book work will be included in this session. The actors in this group will focus on Co-Star, Guest Star, and Series Regular roles for television.

WHEN:
MONDAY(S), TUESDAY(S), THURSDAY(S), FRIDAY(S)
​
TIME:
Mon, Tues & Thur: 2:00 pm - 6:00 pm
Fri: 2:00 pm - 8:00 pm
(1-hour time slots)
​
PRIVATE COACHING:
Get private 1-0n-1 coaching time with Coach Mark McKinnon. Private coaching is for beginning and experienced actors. The actor will work on their film/TV audition technique and learn about the business of acting.  Book work and activities will be included to help create a detailed plan to grow your acting career. Some sessions may have one other actor scheduled for scene work.

​
PRICE:​
​$60 / Session
OR
$200 / 4 Sessions
Register for Private Coaching
​​Questions or Concerns? Email us at actingcoach@mckinnonactingstudio.com.

“Mark has helped me determine and realize what my "brand" as an actress is, in a very successful, unique, and casting- agent- drawing way!  And perhaps most importantly helped me to see my true potential as an actress. Since studying under Mark I have booked several high paying gigs!”
-Ariel Lewis